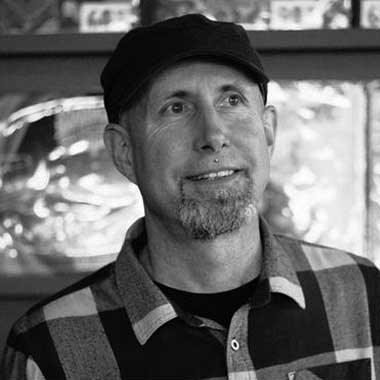 Bruce Pavitt is an engaging speaker, music historian, professional DJ and the founder of Seattle’s Sub Pop record label. He is available for speaking engagements, independent consulting, and rocking the house as a DJ. Bruce currently works as Creative Director at 8Stem interactive media.

He is the author of Experiencing Nirvana: Grunge in Europe, 1989, a photo journal documenting his travel experiences with Sub Pop bands in Europe, and SUB POP USA: The Subterranean Pop Music Anthology, 1980-1988, a compilation of his early Sub Pop zines and columns. Both books are available through his publisher, Bazillion Points.

In 1988, along with business partner Jon Poneman, Bruce opened the doors to the SUB POP record label in downtown Seattle. By the early 90′s, SUB POP had released recordings by Nirvana, Soundgarden and Mudhoney, and helped initiate a global interest in Seattle area music.

Both an entrepreneur and music historian, Bruce has authored two books, Experiencing Nirvana and SUB POP USA, a collection of his early Sub Pop zines and syndicated columns.

Recognized as a cultural visionary and Seattle business icon, Bruce has appeared in a number of documentaries, including Sonic Highways and Hype. His footprints have been bronzed and embedded into the Walk of Fame sidewalk at 6th and Pine in Seattle, alongside Jimi Hendrix and Bill Gates.

Bruce Pavitt currently lives on Orcas Island, Washington. He is the father of two, and works as Creative Director at 8Stem interactive media.