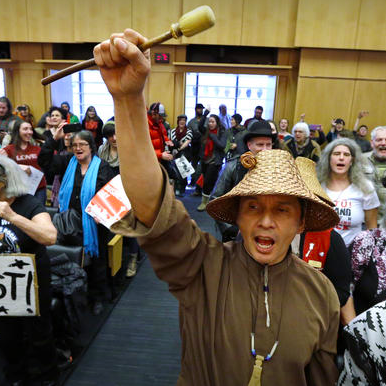 Paul C’IYOKTEN Wagner is a member of Saanich First Nations and has been speaking out on social environmental issues since he was a boy at City Hall meetings working to keep toxic fluoride out of drinking water.  A strong advocate of ancient ways and teachings of the circle of life as well as the return of our Elder women to guide our societies in to life.

In 2013 C’IYOKTEN assisted with Idle No More rallies and actions here in Seattle as well as speaking at them. In December 2015 he was honored to speak alongside Jill Stein and Deborah Parker at the Cop21 Climate Talks in Paris with the Salmon is Life Coalition. After participating in the Seattle to Standing Rock Canoe Journey in Late August 2016 he started the campaign “Winter Shelter For Standing Rock” where he and volunteers built “Tarpees”  (teepee-like winter shelters) for Indigenous Water Protector families (with elders). To date, 56 of these 12 person arctic shelters with custom wood stove heaters have been gifted to various points of resistance in Canada and the US and are still being gifted today.

After returning to Seattle C’IYOKTEN formed Protectors of the Salish Sea, an Indigenous led organization dedicated to ending the era of fossil fuel in our Salish Sea and beyond through direct divestment actions. Protector’s latest campaign is to gift a Coast Salish Canoe to every nation in the Salish Sea creating a Water Protector Tribal Youth Canoe Alliance where tribal youth will help build their own family canoes. C’IYOKTEN has organized numerous walks and rallies, co-authored the Tokitae/ Salish Sea Whale Sanctuary Proclamation (which has begun the process of recognizing our Salish Sea as Salish Sea Whale Sanctuary to save our Wild Salmon and Orcas from extinction as well as the return our L-Pod orca Tokitae (AKA Lolita) to our Salish Sea releasing her from 48 years of slavery at Miami SeaAquarium).